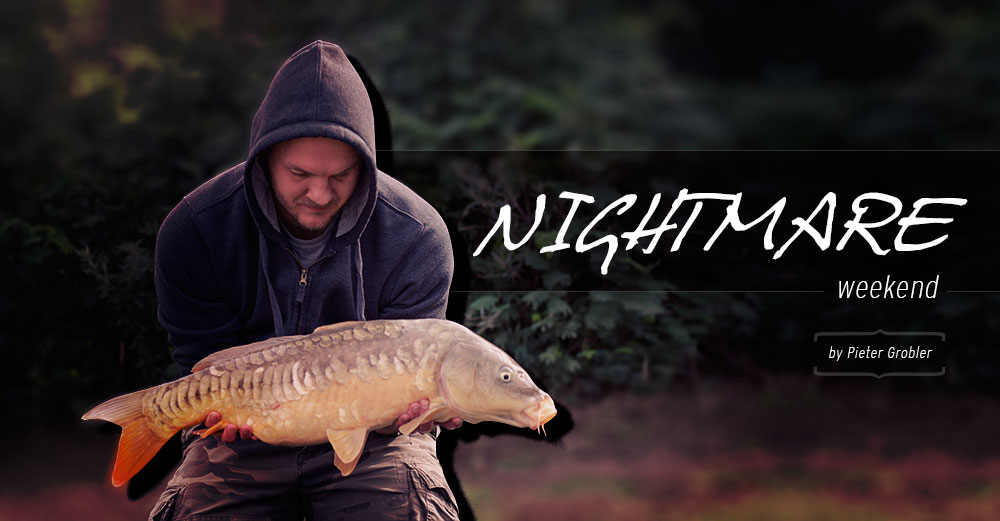 Who wants to work on their birthday? This is a question I ask myself every year, but inevitably I find myself behind a desk, wishing I had booked some leave, packed my rods and gone fishing. Well, 2015 was going to be the year that I would change all that, and my first step towards my wish coming true was a reservation at my favourite spot along the Breede River for four days.

I was ready to wake up with a candlelit cupcake in the one hand and a fishing rod in the other while my bait alarms sang “Happy Birthday!”. Boy was I wrong!

My wife Christelle and I set sail for our adventure on the Thursday, a day before my birthday. I have never been this eager, prepared and ready for a carp-bashing-of-note before. After getting through early morning traffic along the N1, we arrived at our destination. As we made our way to our swim, a few springbok greeted us with the impressive Breede River shimmering in the background. Ahh... it was perfect!

We quickly set up camp and not a moment too soon I dropped my canoe in the water and fired up my sonar to explore the area. I already had a pretty good idea where I wanted to fish with my knowledge of a previous trip to this area. All I had to do was find those underwater snags (trees), drop my markers and scatter some feed. I found my first spot fairly quickly with the second one soon to follow and, literally, not far away. During my previous trip, I hesitated to fish spot two because it was situated behind snags (spot one). Not wanting to risk the safety of the fish, I moved the second marker further to the left, keeping it on the slope I found. Without further ado, I placed the third marker to the left (50m away from my swim). Spot three would simply be a test to see if I could bait a clean spot without any snags and still pick up fish.

I baited all three spots with a few handfuls of hemp and my own homemade boilies. During my previous visit, my homemade baits delivered a few small catfish and plenty of carp. So, with my confidence sky high I made my way back to solid ground. I proceeded to get my rods marked up and ready for action. Out of personal preference, I decided to cast out all three rods.

With the snags in mind, I had already loaded my rods with a proper leader line. In conjunction with the leader, I would also fish with braid. Another personal preference, although not the best for casting. My rig of choice would be the Multi Rig fished with bottom baits, using 25lb JEL-E-WYRE and a size 4 Fox SSSP Arma Point hook.

But wait… back to some more fishing...

The left-hand rod (spot three) was the first to scream that afternoon, and as expected the first fish to greet me was a catfish (barber). Not unusual, as Jaco Jacobs advised me, it was common with boilies in rivers. "The first one is always a cat!", he said. Without wasting any time, I cast the line back where it belonged. My second run didn't come long after, this time it was a beautiful Breede River mirror from the first spot against the snags. Yes, it was game on, or so I thought, as it was to be the only fish for day one. But the action was not over yet, oh no!

This being my first night out after an exhausting few days (working on the blog), I decided to take it easy and retreated to our tent after a quick shower. I retired my rods, leaving the hookbaits and rigs attached, dangling over the rod-rests. I proceeded to attach the swinger to the retrieved line and turned the volume up a notch on the alarms in case someone decided to do some late night shopping. Then it was off to bed for me. Just as I started to nod off in my warm and comfy tent, all hell broke loose outside! “Someone decided to do some late-night shopping after all!” – this being my first thought while I frantically started searching for my headlamp.

As I opened the tent, a saw a small light-brown flash of colour between all the bright blue Delkim lights. "What was that?", I asked my wife in a slightly raised and concerned tone. I made my way out of the tent and what I saw blew my mind. A Cape Genet (muskeljaatkat) managed to hook itself while munching a boilie, and it was completely freaking out – obviously in great distress. The scene I approached resembled the final episode of "Strictly Come Dancing".

It was my duty to help this cat, as I made the blunder of leaving my hookbait attached in the first place. Facing the peculiar situation in front of me, I gathered all the testosterone I could muster and proceeded to engage in combat armed with two towels, a pair of gloves, and my wife for moral support. This cat had my ass for dinner each time I tried to pin it down – scratching and biting its way to freedom! In fact, Manny Pacquiao stood a better chance of pinning down Floyd Mayweather – and we all know how that went. This cat ran circles around me!

High on adrenaline the battle continued, I was oblivious to all the battle wounds I was receiving. That was until it chomped down on my fingertips. Mother of Mary did that hurt! It felt like someone slammed my fingers in a door. After numerous attempts, trying to get hold of the ‘kitty’, it snagged itself around a small tree. I could at this stage see that my rig mechanics  were spot on, as it hooked that poor creature good in the upper section of its mouth. I truly felt bad for the poor thing. I grabbed my Leatherman (an early gift, thank goodness) and quickly removed the hook. Like a bolt of lightning the cat disappeared – it  could still be running (probably halfway to Joburg by now), I think.

To make sure my teeth didn't fall out the next day from some weird bush virus, we made our way to the nearest Mediclinic in Worcester. Halfway to hospital, my wife and I got a whiff of my physical condition, and realised the ‘kitty’ had left more than just scratches and bite marks – if you know what I mean? Lovely! As the adrenalin wore off, and my hair started to settle, we reached the emergency room. The Mediclinic staff had a giggle at my dilemma and gave me a tetanus injection to ensure my hair and teeth will stay in place for my birthday the next day. It wasn’t long before I was back at the campsite for shower number two!

Remember the two towels I used to shield myself against the demon genet? They ended up being properly violated! So there I was taking a shower and drying myself off with a cheap Pick n Pay blanket. It had the drying potential of the plastic bag it came in. But I made it work and in no time we were back in the sack.

The next morning greeted us with cold arms; winter was creeping closer, but I didn't care... My dream birthday next to the water finally arrived, and it was time to open my present from my wife! With vigor, I made my way through that wrapping to find my first carpy book to start my collection: Jim Shelly's Carping Re-cut. It would be an understatement to say that I was ecstatic! Plus, it came signed with a personal message from my fishing idol: “Catch a chunk m8”. Magic!

I soon had my rods out, and spots baited up ready for the new day. To be honest, at this stage I took it down a gear and enjoyed the day relaxing and breathing in some  fresh air. The morning delivered a few fish and a pattern started to emerge. For every carp I caught, I caught a cat (no genets). I proceeded to re-bait each spot that delivered fish with a handful of boilies using a throwing stick. By the afternoon, the wind picked up gradually and our first neighbours arrived. Without me knowing it, this weekend was about to take an even greater turn for the worst. As our neighbours proceeded to set up camp, a gust of wind came from nowhere and ripped the cords right off our gazebo, folding it like origami and slamming it straight into my car. The end result was a dented door and roof with the side view mirror removed for good measure. (Later that week my insurance company totalled the damage to my car at just under R12 000. Ouch! That hurt almost as much as the ‘kitty’s claws’.)

This chapter was not in the birthday weekend script. What followed wasn't any better. I proceeded to nail the cats left, right and center. Darkness was soon upon us, and I said farewell to my 33rd birthday by pouring myself a 12-year-old single malt Scottish whisky. Eventually, calling it an early night – again. The wind had broken more than just the gazebo and my car!

Saturday morning I was up relatively early, ready for the challenge ahead. I could do nothing at that stage but fish! So I set my mind on the task of at least making it a good fishing weekend. What else do I have to lose? The second spot behind the snag was the most productive for the day. Of the three spots, this one took the most rod bending to get the rig where it needed to be. So much so that I ended up with one rod out of commission due to a wind knot. The joys of casting with braid remember! Yes, my sorrows continued as it destroyed the first guide.

My weekend didn’t play out the way I intended, but such is life and fishing. Some days you win, other days you lose. I learned a few valuable lessons. Never leave your hookbaits and rigs outside unattended, especially at night! You never know what kind of visitors you can  expect. Don’t cast long distances with braid and a thick leader, and always remember to pack your storm straps! But as a precaution, don’t park your car near any structure that has the potential to fly. Especially in Cape Town!

Yet, if your birthday is coming up and you are considering time spent behind your desk at the office, don’t do it! Pack your gear and go fishing – you only get one chance to wrestle nature with its sharp claws or hook some beauties with open jaws.