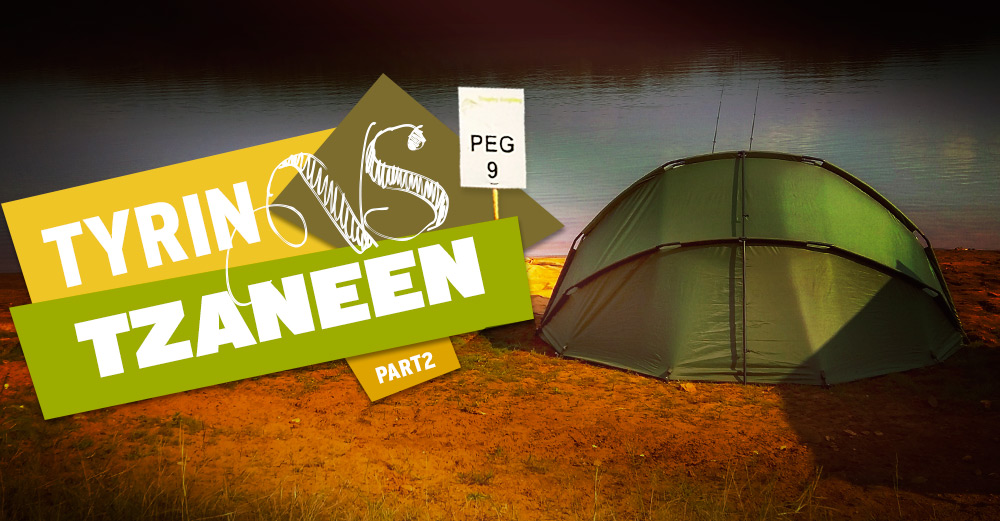 After my practise session at Tzaneen Dam, I realised that the SA Trophy Carp Angling Finals was going to be one to remember. I prepared for the competition soon after and stocked up on hooklinks, hooks, leadcore and most importantly bait. To make sure I had enough feed to last me over the five days of the competition, I bought 20kgs of tigers, maize and hemp seed each.

My peg mate Lance Blackbeard and I hit the road early on Friday morning. Lance is a good friend of mine; a trusty fishing buddy, we've had some successful sessions together in the past. Our spirits were high, talking tactics the whole trip and the memories that could be made at this incredible competition. We arrived at Mowana Game Farm located 10km outside of Tzaneen and Saartjie, the manager of the farm, greeted us. This is where we would stay before we headed out for the competition. Oom Kobus Lottering and Steve Quinn from Meat2Oceans (the tournament sponsors) arrived a few minutes later and mentioned to us that they were going to place the pegs for the competition. Without hesitation I asked Oom Kobus if he minded if we tagged along; being the gentlemen he is, he agreed.

We travelled to the first lot of pegs along the Sawmill Arm (the Luvuvhu River inlet to Tzaneen Dam), and I immediately saw the peg that I would prefer: peg four. I fished this spot at my last session. We continued our drive to the Modjadji Arm (on the Letsitele River inlet to Tzaneen Dam where the Modjadji Bridge is located) and noticed a few more stunning pegs with great features. I took the opportunity to snap a few pictures of the swims, and I liked them all except peg 11. This swim had no solid structures, such as slopes, and I felt that we would be cut off quite badly if anglers fished peg 14 and 15 to the left. If you are cut off from main features, it would at least be nice to target slopes – another highway the fish could use. It was great to get an overview of the swims, and after placing all the pegs; we headed back to Mowana Safari Lodge.

Saturday morning it was time for boat inspection, followed by a trip to the shops to get food for the long session ahead. The peg draw was scheduled to take place at 4pm, and it was upon us rather quickly. By the time it was finally our turn, we were shaking, anxious to see what peg we'd draw. We drew peg nine, and I checked my phone immediately to see the photos I had taken. It wasn't a bad swim, as long as no one was directly next to us. Murphy's Law, Devin Hansma occupied the peg directly next to us, and we realised that we were going to be cut off. Lance and I discussed strategies, and decided that I would target the slope on the opposite bank and the front of pump house at a depth of two-metres. Lance was going to target the riverbed.

The competition commenced on Sunday, and we were up at 4am that morning to head down to our swims. We took our time finding features, fed our spots and by 2pm we had all our lines in. We finished setting up camp and we sat anxiously waiting for the first catch report to come in. That evening, at around 6:30pm, we heard a bait alarm go off... to our disappointment it wasn't ours. Moments later, we watched as Devin grabbed the rod and landed his first 10kg mirror for the competition. Disappointed and tired from the day, we decided to crawl into bed early.

I set my alarm for 5am the next morning to see if I could get a glimpse of the first bit of fish movement in the early hours. There wasn't much activity and I decided to wait patiently until 11am. If I had no action by then, I would re-bait with my tried and tested peanut butter tigers. 11am had come and gone with no fish on the bank, and I re-bait my line in the shallows with peanut butter tigers, and my line sitting at a depth of nine-metres I changed to double sweet corn tigers. Lance decided to go with his hemp seed boilies. I didn’t quite agree because I was worried that barbel might take an interest in his bait. We watched the catch reports coming in, anxiously waiting for our belting run!

Before we knew it, the second night was upon us – it was relatively quiet and not much was happening for us. Early on the third morning my line at nine-metres went off at a rate of knots. Grabbing the rod and rushing into the boat, I quickly made my way to the slope where my line was. I was on top of the fish in no time; fighting what felt like a typical strong Tzaneen carp. I saw the golden shimmer on the surface and she continued to pull me into the snags. A few minutes later, a beautiful common graced my net – the ice was finally broken!

I made my way back to the bank quickly. Stephan, the weigh-marshal was already waiting for me to weigh her. She came in at 9.28kg. We released her again, and she swam off strongly. I re-baited with double sweet corn tigers and made my way back to the spot swiftly, dropping the line with ten handfuls of feed over my hookbait. Surprisingly, nothing else happened for the rest of the day, but with the action we had in the morning I was extremely eager to see what the night held for us.

At around 2am that morning I had an absolute belting take on my right-hand line that was sitting in front of the pump house. I hopped onto the boat, only to be told by my peg mate that he had heard the hippos about an hour ago. Now I was shaking from adrenaline and decided to go ahead anyways – not going to the opposite bank, but playing the fish in the deep water. It was an extremely dangerous decision, but the theory is that hippos won't really swim to deep waters. Whether this is true or not, I don't know, but it made me feel safer. Mist surrounded me, and I could barely see five metres ahead.

By the time I netted the fish, I felt something bump the bottom of the inflatable. I panicked and completely freaked out, only to discover the boat got stuck on a snag. I lifted the fish onto the boat and made my way back to the bank. I gave it a quick weigh and she came in at 11.57kgs. Not bad, so I quickly sacked her and discussed with my peg mate whether it would be a good idea to drop the line again. Knowing the fish would be in that area, I quickly took five handfuls of feed and re-baited with fresh peanut butter tigers. I made my way out to the pump house once more, only to hear the hippos again! When I finally had a clear patch through the mist, I could see the massive shape of what looked like a cow! It then dawned on me that this wasn't a cow; this was what I was hoping to not come across while out on the boat alone at night... A HIPPO. Luckily, this one didn’t seem too phased by me and I speedily dropped my line and made my way to the bank towards the warmth and comfort of my bivvy and bedchair. My safe place for the rest of the night!

Coming to an end

The next morning came and I was rather upset that my line didn’t have another pickup. The weigh-marshal weighed my catch and I quickly grabbed some photographs. This was the last fish of our session.

The competition ended on Friday, we packed up and made our way to prize giving. We knew we didn’t win, but the experience was priceless. Team Carp Gigs came first for the team competition, and the peg that came first was peg two, who received a trip to France to represent South Africa. They had no fish until the third day and out of nowhere they caught six! The biggest was 12kgs, and smallest, 8kgs. It just goes to show that anything can happen in this game; your place isn't guaranteed until the end of the competition. In second place were Devin Hansma and his mate from peg ten who also received a trip to France to represent South Africa in the World Carp Masters at Lac du Der in August 2015. They started the competition off with a bang – in the first two hours, they landed their first fish of 10.7kg. From there, they were averaging on two to four fish a day. They had the lead until the fourth day! Well-done guys!

My goal for next year’s SA Trophy Carp Angling Finals is to learn how to fish different situations. I won’t let the peg I draw determine whether I will be successful at the competition or not. I'm going to improve my tactics and learn better ways of attracting the fish – even if I've been cut off by other anglers from great features. Until next year!